Home › CD Diary › An Ode To My First Grade Teacher

An Ode To My First Grade Teacher 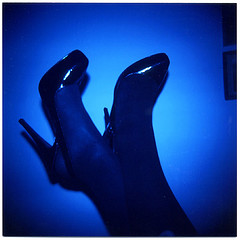 I’ll be so kind to admit it right now. I’m in my late thirties and, using my sharp math skills, have spent the better part of thirty years as a crossdresser. Even as a lot of time has passed since my first days across the border, I’ve always found myself trying to recall those first moments that would bend my gender the rest of the way.

No, I didn’t raid my mother’s drawer of bras and pantyhose. No, no one decided they would have some cruel fun, dress me all girly and proceed to laugh at me.

It actually can be traced back to first grade in grammar school and my beloved teacher, Mrs Rainwater. I can vaguely remember what she looked like. Things like her youthful face and short curly hair.

I remember one detail about her rather vividly and something that bonded me to her back then. She always wore blue knee-high socks on some days and on other days, blue pantyhose.

That is until the unthinkable happened. Ok, it was innocent but she lined up all the student in her class and proceeded to give each child a big kiss on the cheek, including me. Try that today and they are sure to slap handcuffs on you. I’ll chalk it up, though, to the post-hippie love present since it was the early 80’s.

I can characterize this first experience as the early days of my new-found fetish. I still had not yet liked pantyhose (we’ll get to when at a later date) but the girly socks had it’s effect. I didn’t feel like a girl but the knee-highs with a rub in the crotch was very satisfying.

Mrs Rainwater is probably retired by now. I’d just like to see her one last time, give her a real kiss and let here see how some modern, sexy blue pantyhose look on her former student crush.

7 comments on “An Ode To My First Grade Teacher”