Home › Commentary › To The Actual Woman, If You Stumbled Across This

To The Actual Woman, If You Stumbled Across This 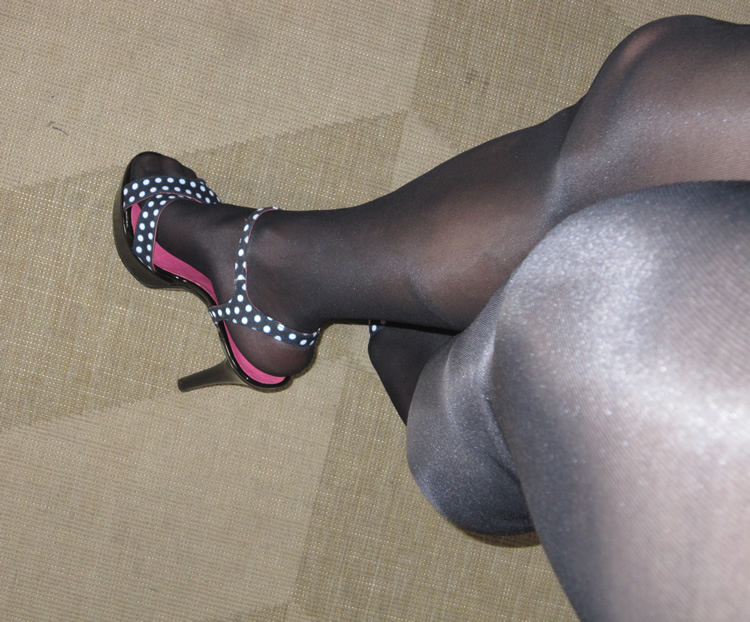 That said, my perspective then becomes not one of deep insight and philosophical analysis of why we are who we are but rather a reflection what I personally feel at the moment, crossdressed. So there you have it, a man draped in satin, lace and nylon writing in sexual overtones which, when you realy think about it, boils down to a man writing about sex. It may be geared for the average crossdresser or male pantyhose enthusiast but women may find it as just guy chat down at the bar, albeit, a bit kinkier. “Um, no thanks,” I can hear as you click away to Zappos. I understand.

Not that I’m looking to pander to women or, all of a sudden, cater to the audience of women or even a date for that matter. That’s not the point. Then again, I don’t want women to leave here thinking us crossdressers (really, this one in particular) are a bunch of pervy weirdos either. OK, so we might be (this one in particular), however, there is a side of me, and maybe others, that has a lot more in common with our mimicked counterparts than what is likely perceived.

I’ll try to explain it further. Call it a sort of enlightenment from a man happily in pantyhose and drinking coffee (and a bit turned on). Please note one thing and that is that crossdressers are very fluid in their beliefs, interests, sexual preference or even choice of garments. So I don’t speak for all, per say, just your truly.

I firmly believe that all males have a feminine side to them. Some acknowledge it naturally without knowing, while others may not even try at all. I particularly know it is a major part of who I am and act it out, if you will, accordingly. In my case, that female side of me is primarily sexual, so I want to feel like a woman, be desired like a woman and express my femininity as a woman which, in turn, fills a need to validate the female side of myself.

Now, I neither claim to be a woman or even being similar to one, nor do I wish to become a woman now or in the future (but who knows what the future brings). I prefer instead to enjoy the sensations of femininity whether it be by slipping into sexy lingerie or simply just shaving my legs. I have that need to step into a role as a sexually attractive woman, then validate it by being desired by other men, women or other crossdressers.

The cherry on top for me, and ultimate validation, is to be ravaged and cummed on as a woman. Yes, I know the gender parts don’t equate by I do have a “hole” too.

Even in this day and age where LGBT acceptance is gaining traction as the new norm, we still live in the old world where crossing gender boundaries is still a sin in practice. This is a major reason why I still can be considered in the closet, although with my head peeking just outside of it for a look. I won’t get into the issues, though, of having to tell of my “condition” to friends and family and significant others which I’ll leave for another day.

So that means crossdressing is still a major taboo for the many who don’t understand it. You know what? Dabbling in a taboo is extremely exciting, satisfying those “this is oh, so wrong but oh so, so right” moments. Some of my best memories as a crossdresser were either being caught in the act or nearly caught in the act which were, themselves, embarrassing situations at first but later fodder for my sexual thrills.

Imagine a world where what we wore had no gender. Men in miniskrits or jeans and maybe even a swipe of lipstick or full-on makeup. It wouldn’t matter. So the choice of underwear or slipping on a pair of favorite pantyhose would matter either. What would become of crossdressing then? For myself, since there would be nothing to hide, there would unfortunately be a lack of excitement and “oh so” moments. I’d just go back to wearing sweatshirts and jeans with just boxers underneath and maybe try sex with billy goats for a kink.

This is probably the area most misunderstood about crossdressers. In particular…

Well, yes and no. Are non-crossdressers heterosexual and have sex missionary style? Some crossdress with without the sexual thrill involved. Others, like myself, get their sexual kicks and others may eventually transform into women. Just as with non-crossdressers, sexual preference varies wildly amongs us panty-wearers. On the individual level, there is just no telling where a crossdresser’s journey will take them.

Personally, I am both attracted to women and other crossdressers which would label me as bi. Yet, I’ve grown to stop thinking or caring about the bi label and let myself go with what I feel in what can be termed sexually fluid. Hell, I may eventually have sex with a non-crossdressing man in the future even though I don’t desire it at the moment. Sexual fluidity keeps out the stress of acting according to the label. Not to mention, frees myself of any guilt or shame of a label because I refuse to acknowledge it. As well, it leaves me the freedom to be the crossdresser I am, ignoring the boundaries and exploring my curiosities.

Now, I want to reiterate that what I say is from my own point of view from a crossdresser, who is very comfortable with the fact, yet still three-quarters in the closet with her identity. Really, my life as feminine me is just one interpretation of the many endless ways a crossdresser can go about their life in an umbrella of sorts for males who don womens’ attire and do something… whatever while draped in it.

The one thing almost guaranteed from a crossdresser, though, is an extra wardrobe closet to raid.

Tagged with: crossdressing explained, for women
Posted in Commentary