The 80’s Are Still Just as Sexy Today 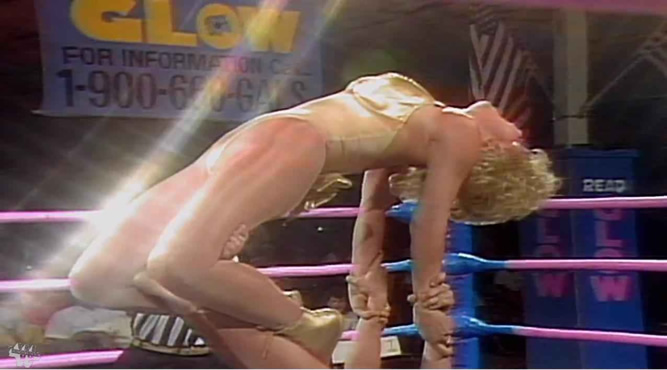 Oh my, how I love reminiscing about the 80’s in one of those frequent moments I’m caught daydreaming through random crap that flies through my head. Usually it’s the music that brings me back to the days of my childhood. Once in a while, however, surfin’ the net sometimes does it just as well.

That’s when I usually come across images, not created from digital cameras, but scanned from photos or magazines and and portraying beautiful women wearing shiny tights. You know they are from the 80’s either from the graininess of the image or the poofy hairstyles you see. It is then the memories of my developing pantyhose fetish reignite causing me to look on and on for more like the 80’s legs junkie that I am.

And then, there they were, the GLOW Girls. For those out of the loop, GLOW was sort of a spin-off of WWF wresting but for women, created sometime in the mid-eighties I believe. I remember catching them on cable TV a few times absolutely falling in love after watching them (sort of) pounding the shit out of each other while clad in their sexy costumes consisting more or less of leotards (or sometimes lingerie!) and tights.

Looking at those images, too, and I can’t believe how gorgeous those tights looks, even to this day. I’m very amazed since pantyhose back then were really nothing more than 100% pure nylon. OK, maybe some had the new technology of spandex built in to give a little shine but they were nowhere near as fetish-inducing as their more alluring tights counterparts.

Suffice to say, it was about the time of the GLOW girls, not to mention the tights-crazed workout era, when I knew I had to slip on my legs what they were wearing too. The only problem was that there was no way I could get a hold of of those beautiful tights which, if I’m not mistaking, were made by Danskin. Back then, there was no internet, eBay or even a dancewear shop where I could trick my parents to drive me to.

So I did the next best thing, ride my bike up to the nearest convenience store, browsed the Legg’s pantyhose rack and picked up my first pair in an off-black shade. No, they weren’t the same as those much sexier Danskin tights yet, at my young not-so-picky age, it didn’t really matter then. I locked the door to my room, slid them over my leggs (pun intended) and began the wonderful journey of my pantyhose fetish.

The truth is, I never got a hold of those long-coveted shiny Danskins until quite a few years later, you know in the age of the internet and eBay. I loved them for sure, bringing back old memories of Jane Fonda videos but, especially, bringing back the excitement I had after watching those GLOW girls wrestling in them, practically creating a commercial for future pantyhose or tights fetishists like I was.

And so we are here today. Yes I have my light suntan colored Danskin tights on. Yes, I have on a sexy blue thong leotard and, damn if I say it, I look downright hot in them. Now if only I can find one of those GLOW wrestlers to beat the shit out of me, I’ll be in absolute heaven.