Home › CD Diary › So Really, What Makes Pantyhose So Arousing?

So Really, What Makes Pantyhose So Arousing? 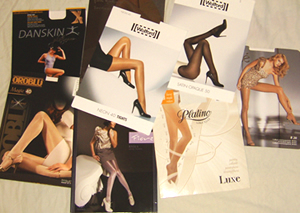 The Best of The Best

Of course, I could go into the soft clingy feel on my legs and body or how I love checking out in the mirror the shine they leave on my legs. Yet, I sure as hell don’t feel the same way when putting on a tight pair of jeans. Shine alone isn’t exactly something I have a severe fetish over either. I’m not a moth.

Then the answer dawned on me. Let’s just say, hypothetically, that pantyhose were acceptable in society to be worn, not strictly by women, but equally by both sexes.

No more clandestine purchases at your local department store.

No need to wear pantyhose hidden from public view.

Alas, the thrill of wearing them is shot dead in the back.

So the object isn’t the source of our longing but rather the taboo itself of crossing the gender line to wear pantyhose that makes it so arousing. Maybe best said that it’s so wrong but it feels so right.

Unfortunately for the taboo, there is a movement to make pantyhose mainstream for men.

I don’t have exact numbers but I’m fairly certain that a large portion of all pantyhose purchases are made by men (and crossdressers like myself). Manufacturers aren’t stupid and see a gold mine for a market. Proof of this is that we are even bearing witness to pantyhose made for and marketed solely for men.

I can understand the male pantyhose wearers out there who want to wear them without the stigma but, as a rigid connouisseur myself, I’ll be the last to join in and buy the “just for men” version. Where’s the fun in that?

Personally, I hope the male pantyhose movement never gains steam since I even find it ridiculous. Apparently others find it rather offensive too.

16 comments on “So Really, What Makes Pantyhose So Arousing?”