Home › CD Diary › This Crossdresser’s Other Vice, Sort Of

This Crossdresser’s Other Vice, Sort Of 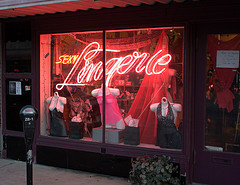 I guess I’ve talked about pantyhose enough thus far and, what can I say, it’s an integral part of me being Sheery the crossdresser. It’s my favorite “partner” turning me on anytime, anywhere she wants.

Once in a while, I wear only pantyhose when I feel like it but they are an absolute requirement anytime I change en femme. When I get in my real girly mood, though, the “look” just doesn’t seem quite complete without its complementary pieces.

For some reason I have an odd relationship with lingerie. Sure, there are the favorite items, some of which, I paid quite a price to get (but look so good in). When you think about it, too, lingerie should make you feel more intimately feminine than anything else you could slip on.

Shall I say, even more so than pantyhose.

Yet, oddly, I don’t find myself hurrying into my black teddy when I’m in the mood. Plus wearing lingerie and nothing else, well, just doesn’t cut it for me. Actually I start to notice its uncomfortable properties (e.g. underwiring, thong) then begin to feel like the man in women’s underwear.

In my eyes lingerie ≠ pantyhose.

Combine the two, however, and I bask in pure femininity at last.

Lingerie + pantyhose = time to jerk myself to oblivion.

I shouldn’t say this is a real surprise. After all, I did get my start in knee-high socks which then progressed to pantyhose in my early teens. My first foray into lingerie, though, did not take the typical route of raiding whatever was in a female family member’s drawer. No, I had to make it exciting and find something all to myself.

So imagine a visibly trembling fourteen year old taking his allowance to a JC Pennys, picking out his favorite piece (a blue camisole and panty set) and drumming up the nerve to buy it. I can still remember the rush it brought while shaking incredibly when I rushed out the store in embarassment but with a hard-on.

You would think, especially after this, why lingerie wouldn’t turn me on as much as my beloved pantyhose?

Well, it’s kind of like eating your favorite cereal and milk. Together is where belong although you’ll catch yourself eating that cereal alone out of the box on occasion.

A glass of milk without the cereal, for me anyway, is like getting a thong wedged too tightly in your crack.

3 comments on “This Crossdresser’s Other Vice, Sort Of”