Home › CD Diary › Getting Caught, So Feared Yet Such a Turn On

Getting Caught, So Feared Yet Such a Turn On 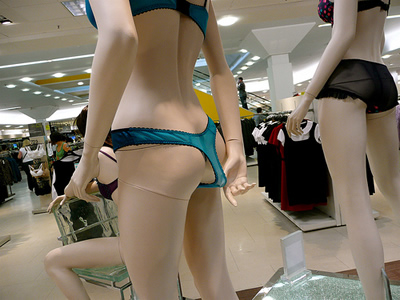 From my perspective, one of my biggest fears as a in-closet crossdresser is being caught by someone who notices the tiny speck of nail polish remaining on my finger which I thought was completely clean. That or she notices the strap of my teddy just barely bulging through the sweatshirt I wear over it.

Those were two separate incidents, with me out and about in the city, where I didn’t know the other person. I initially try to avoid, at all costs, any revelation of my feminine attire since it makes me extremely embarrassed. Yet I notice that, as soon as the “shame” subsides, I am left with a gratifying feeling.

Is this how an exhibitionist feels, I wonder? Yep, I think it does.

Actually I can recall one of my most unforgettable moments, exposed as a crossdresser, starting out as an embarrassing situation and leading to a rush of sexual tension.

When I was fifteen and confined strictly to a pantyhose fetish, I decided I want to try out lingerie to accompany it. This time I wouldn’t “borrow” anything from my sister or mom. This would be mine to enjoy all to myself.

So one day after school, I walked into a JC Penney at a nearby mall and headed straight for the lingerie section. I couldn’t stop trembling as I entered and browsed about. There were maybe two or three other women there who might have noticed me. I managed to gather myself together, though, and concentrated on the task at hand.

Then I spot the two-piece turquoise blue camisole and panty set that I couldn’t resist. I figured a size medium set would suit and made my way to the register, trembling again as I realize I am about to actually buy lingerie for the first time. However, I wasn’t prepared for what came next.

The cashier, a woman, greeted me warmly but as she looked down at the camisole set I had placed on the counter, she said three words with an unforgettable look of surprise that made me want to die right there.

Deeply embarrassed and obviously made as a crossdresser, I tell her yes as I contemplate turning around and running for the exit. I stick it out though, finishing the purchase with what composure I had left and leaving the store visibly shaken by this time. At that instant, I felt almost traumatized by the experience.

So, if being exposed is so gratifying, why don’t I just do it more often? It’s pretty simple: the urge to prevent embarassment to myself easily outweighs the urge to expose my crossdressing even though the shame quickly subsides and gives way to stimulation.

I believe that one day soon, as with many others into crossdressing, that hidden side of me will gain more exposure, little by little. Why haven’t you notice the pantyhose through the holes in my jeans yet?

34 comments on “Getting Caught, So Feared Yet Such a Turn On”