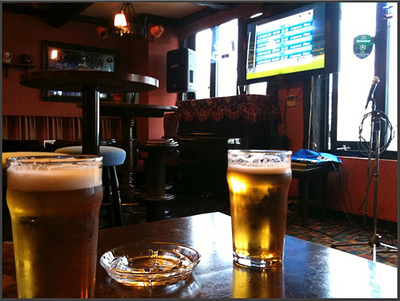 Another day, another fantasy manifesting itself in a story out of my head. I hope you enjoy ;).

I don’t normally go for men in real life but when that gentleman I meet has a side to him, sharing a common bond with me if you will, well then I may have to change the rules a bit.

It was a sunny day when me and Adam were planning to meet for a beer at the local bar. I’ve know Adam, who is openly gay, for a couple months now and, while he knows I’m straight, we get along well and enjoy hanging around together as two completely platonic friends.

After a few beers each (and buzz that follows), Adam made a quick mention of the Carnival parade he was in last week and pulled out his iPhone to show me the pictures. Wow, I’m thinking. He looks quite amazing, if not convincing, in that drag costume.

I give him my compliments and curiously ask with a smile, “So do you dress in drag a lot?”

Adam, sensing my piqued interest replies while smiling back, “So why do you ask?”

In my semi-drunken state, I realize I’m being outed yet I don’t feel at all embarrassed. He’s showing me his own photos as a transvestite for God’s sake. I decide to come clean to him.

“Let’s just say I have my own Carnival photos,” I tell him shyly.

“Then tell me more,” he says with a surprised look.

I start by telling Adam that I’m a closet crossdresser and have been so nearly all of my life. The story goes on about how it began innocently as a pantyhose fetish and now incorporates lingerie, makeup, wigs, heels, you name it, all under wraps.

Then to prove my point, I compliment him on his choice of Cecilia de Rafael pantyhose he is wearing in the Carnival photos and inform him I have the same pair, same color plus another pair in a black shade.

I let out a deep breath began to feel oddly relieved as though I were spilling my story to a therapist. Did I really just reveal a part of “closet me” who I hadn’t revealed to anyone else?

Adam remained motionless with that look of surprise still on his face. This time, however, he appears to have the proverbial jaw-drop.

If this would have been my sister or mom listening to my admission, I think I would have wanted to shoot myself in embarrassment right then and there. Since I assumed Adam could relate somewhat, being gay, I trusted and took comfort in him knowing the secret feminine side of me that no one else knows.

At least that was what my beer buzz was telling me to do.

This surprise and silence began to worry me. For all I know he is about to break out in a belly-aching laugh, thereby making me want to shoot myself in embarrassment. Say something, please!

Being the gentleman that he is, Adam says, “Thanks for sharing. I really had no idea but that’s cool.”

He later added to break the ice a little, “We can share dresses and heels now.”

“But first, you’ll have to loan me the black Cecilia de Rafaels,” he says after raising his glass to cheer me.

Suddenly that bit of apprehension turned to complete relief but then, as I pondered what he just said, a rush of excitement came over me. Not only did telling my secret crossdressing obsession lift a huge weight off of my shoulders but, oddly, it actually brought about an arousing feeling for me.

That feeling was something like those times long ago as a teenager buying pantyhose or lingerie at the Macy’s department store. First, there is that paralyzing fear of the cashier giving you the “look” and then the rush of excitement as she hands back your change, you run for the exit and then eagerly await going home to try everything on.

As our glasses clanked in cheers, I’m thinking in the back of my mind that I finally have someone, a friend, who supports my fetish. Yet, at the same time, Adam ceases in my eye to be a male who is gay, but rather, that beautiful crossdressing male in his photos. In other words, I began to relish our compatibility.

As I look up at Adam, I notice the expression on his face has changed to a look of curiosity. “He is probably thinking the exact same thing about me,” I think to myself. I get a feeling that this may be a sign of mutual respect and the beginning of a deeper friendship. I can sense this from him too.

Perhaps sensing himself a little vulnerability on my part, Adam calmly asks if I want another round.

He smiles and gets up to get our refills, giving me a friendly pat on the shoulders as if he were saying “I appreciate you telling me.”

We probably stayed another hour or so in the bar, very tipsy at this point. During that time, we didn’t delve into our shared gender-bending activities or really even touch on that subject again. It was more philosophy and general rants but in a way where we were seemingly more open with each other. By now, we feel like two close friends who were really just buddies a couple hours earlier.

We decide to leave the now crowded bar and I suggest we head to my apartment just around the corner and with a refrigerator stocked with beer. I honestly asked this with completely platonic intentions: to continue our conversation some place where we wouldn’t have to shout at one another.

“Oh, I guess I can try on those black pantyhose now, can’t I?” he asks with a smile.

The sexual rush I had in my admission to Adam earlier suddenly hits me again, almost making me dizzy in my drunken stage. I look at Adam trembling and completely speechless but managing to utter something to respond.

One comment on “Platonic Friends and Unexpected Encounters, Part 1”