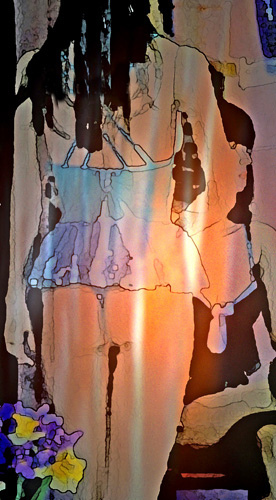 Part 3 of the story of two friends in the midst of playfully crossdressing together after a night of drinking.

It was a subtle yet convincingly girlish “ooh” Adam (actually, now I’ll call him “Eve”) made. Just that one silky touch to her leg was enough to set me dizzy with excitement. Normally, being alone and caressing the pantyhose on my own legs has a similar effect. But to feel it on someone else, albeit another male, is almost too much to bear.

Eve reaches down and gently strokes my crossed leg while my excitement grows so much that I begin to tremble. She takes notice.

“Are you OK?” she asks with a smile, as if she knows exactly what she is trying to accomplish.

I smile back not saying a word, uncrossing my leg and, this time, gliding my nyloned leg against hers and letting out an “ooh” of my own in the best feminine voice I could muster. I could do this all day.

Eve then takes a seat on the bed next to me crossing her leg over and caressing my thigh with her silken toes. She then moves her head forward towards mine as if she were trying to kiss me but then pulls back. At first, it shocks me, but then I’m thinking, “Is it my beer breath?”

“I think we’re missing something,” she whispers as she appears to be eyeing my makeup tray on the top of my drawer in front of the bed. I suddenly realize we still look like two men, even in our lingerie and pantyhose, which momentarily turns me off.

I get an idea, however, as I get up towards the drawer opening the second from the top, full of wigs. Then I pull out one I would really love to see Eve in: the long, curly red hair “Heidi” wig.

“This is for you my dear,” I say as I hand it over to her. She gladly accepts it but quickly grabs the makeup tray and heads for the full length mirror behind the bedroom door, seemingly having done this before.

I then take out the “Maria” wig with long, straight black hair and gently place it on. I make another quick adjustment to my red teddy and Oroblu pantyhose when I stupidly realize there are several pairs of heels in boxes underneath the bed.

“Why didn’t I take out before?” I yell to myself but conceding to my drunken state.

I pull out and open two boxes containing gorgeous 5 inch strappy heels, one red and one black pair. How perfect! The red matching with my teddy and the black matching Eve’s chemise and black pantyhose exactly. I immediately slip on the red pair and walk back and forth across the room practicing my “strut” as I try to conceal my normal clumsiness  wearing high heels.

Meanwhile, I hardly even notice that Eve was nearly finished with her makeup, putting the final touches on her lip gloss. Perhaps she didn’t  notice sexy little me in my catwalk strut back and forth across the room either.

Eve turns away from the mirror to face me. I stand in shock as, instead of seeing my male friend in lingerie, there before me is a beautiful woman, er, crossdresser. I immediately recall the photos Eve had shown me of her at Carnival and can’t believe that the real thing is here in my bedroom.

“Nice heels,” she says. “Are these mine?” she asks while picking up the black strapped heels. She sits down on the bed and tries them on without waiting for an answer. She then gets up and does her own catwalk strut, outdoing my own by a long shot.

I stare in amazement and clap at the show in front of me. “What a goddess!” I’m thinking staring in awe.

Eve finally looks back at me in gratitude, walks over to me and unexpectedly sits me down on the bed. She grabs the makeup tray near the mirror and races back.

“Your turn now,” she says. “Hold still,” adding as she grabs my desk chair and positions herself in front of me.

Meanwhile, my excitement grows uncontrollably as I realize that my longtime fantasy is starting to manifest. Here I am in my silky garments, heels and a wig about to have my makeup done by the most sexy, elegant looking tranny I know.

Sure, right now I’m drunk (or should I say we’re drunk) but, sober or not, it feels sooo right.

I hold still as Eve first applies the foundation. At least that is what I think she is doing. To be honest, I’ve never put on more than mascara and lipstick since I really don’t know how to do much more.

After a few minutes of applying powders and creams and closing my eyes while Eve does her magic there too, she tells me to pucker up while applying a fuscia shade of lipstick and a glittery lip gloss to go over it.

“All done,” she excitedly mutters with a smile. I curiously take my turn at the mirror behind the bedroom door.

I’m in absolute shock at what I see.

“Is that really me?” I’m thinking as I stare in disbelief at my newly made up face. If there was one thing missing from the female look I always tried to achieve, this was it. I never felt so feminine in my life!

Eve walks over to me. “Oh, don’t you look sexy,” she whispers leaning over to give me a light kiss on the cheek where I can see she intentionally wanted to leave a lip print.

I turn towards her, elated at my new womanly persona, and lean in giving Eve a long, soft kiss on the lips in gratitude. I realize I could have just said thanks and smiled back but this was my immediate instinct and, in truth, the real desire on my mind.

To my surprise, Eve had a look of shock on her face as if I had crossed the line.

“Oh, so you’re into gay men now?” she says with a look of curiosity.

“No, just hot trannies,” I quip back.

A moment of silence then came as we both look at each other, each enamored by what we see in front of us. It was the instance where all that curious excitement and sexual tension finally get a chance to release.

And there we go, kissing first soft and slow and progressing slowly into more passionate attempts at trying to ram each other’s tongue down the throat. I can feel our lipstick smudging against each other which I find rather appealing.

I lift Eve’s black chemise and start to caress her pantyhose covered ass while Eve begins to pull me toward the bed, all the while still making out like two teenagers who discovered kissing for the first time.

All this is just too much for my feminized shaft, now impressively jutting out from its pantyhose encasement.