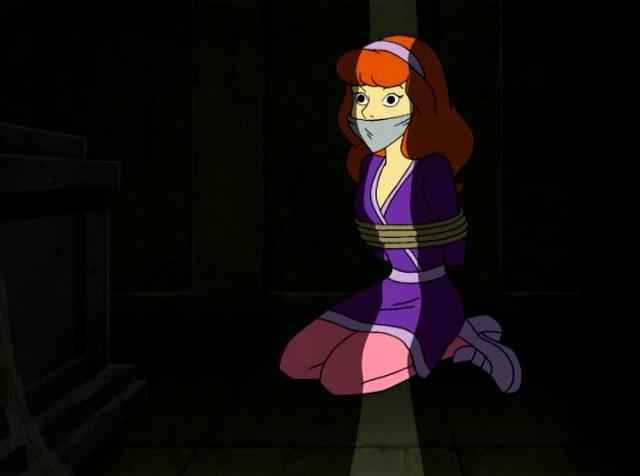 As a kid, I spent hours and hours in front of the TV, like all proper kids did. I’d say I would spend at least a minimum of eight hours a day watching the typical cartoons that showed up on cable which, coincidentally, was fairly new at the time. Yet during the thousands of hours stuck in front of the tube, there were several specific cartoon episodes that stuck out in my mind.

That is, when certain characters would get into trouble, then are erotically bound and gagged by some gargoyle waiting for someone to save them. I somehow never saw this as something those cartoon writers had intended or, really, how most kids probably innocently viewed it. You know, worry about the character then hope he/she gets saved. Or more so, hope the evil villain just kills them off.

Something almost magical happened to me such as when seeing Daphne from Scooby Doo getting kidnapped then bound and gagged by her captor. The sight of her clad in what appears to be pink pantyhose, legs and arms bound and trying to writhe herself free to no avail and screaming at her captor, “Let me go!”

Don’t let me get started on Superfriends either. There we had Wonderwoman dressed in nothing but an alluring bustier and those red knee-high boots. She went bare-legged, I think, but I had always believed she wore pantyhose , too like the human Linda Carter version, and that they were just some nude shade or something (like my mom wore to work). 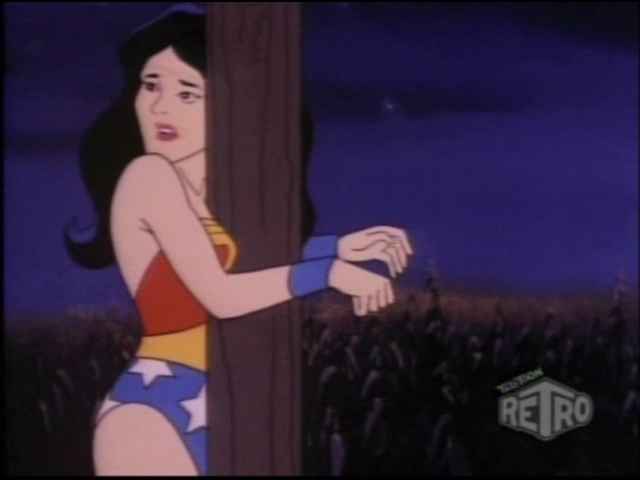 Wonderwoman tied up and afraid, makes me want to be her (Image: Cartoon Heroines Perils)

Once in a while, she would get into trouble and was tied up somewhere by that ever present gargoyle. Meanwhile, I was cheering on the gargoyle to tie her hands and feet tighter, and put a goddamn gag over her. Yeah, more of that please while I stole my mom’s work pantyhose, grabbed some old rope and tried a bit of kiddy self-bondage on myself. Monkey see, monkey do.

Then, for some reason, I had an odd attraction to Aquaman and his gorgeous green fin-enhanced tights. I have no idea why this particularly stood out to me since all the other superheroes wore pantyhose and sexy thigh boots too. I have a feeling, though, it might have been the orange leotard with separate black panties and the unneeded belt around the waist, reminiscent of the leotard and tights era during that time.

In other words, unlike his other tights-cladden hero mates, Aquaman definitely had more of a feminine appeal to him. 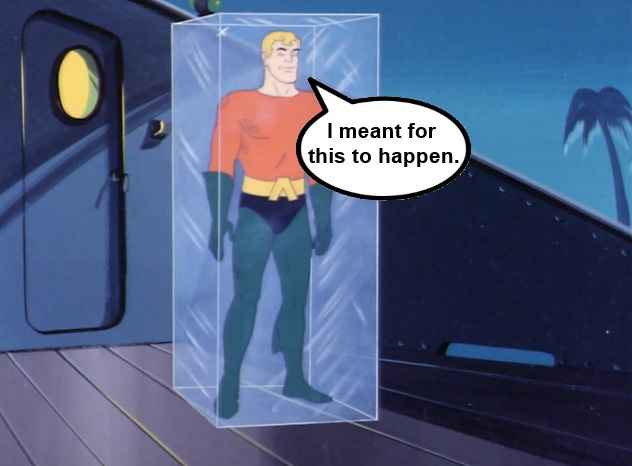 Aquaman, not quite bound in rope but ice will do (Image: Cannibalistic Nerd)

Yet, in one of the rare episodes that he happened to be tied up, that would set off my young hormones, even more so than a tightly bound Wonderwoman. In fact, he was the cartoon character who I most wanted to see bound in his finned pantyhose and screaming to that whatever gargoyle for mercy.

And yep, you guessed it, with everyone in the house gone, wearing pantyhose stolen from mom, meters of rope handy and replaying those scenes over and over again.