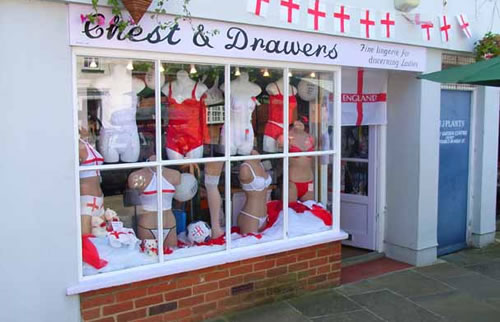 Part 1: An Offer I Couldn’t Refuse

It was one of those days where I was feeling glad to be feminine but I had the urge to venture out and find something new and sexy to throw on. Not that I didn’t have anything to wear. I mean there were plenty of cute miniskirts, tops and dozens of packages of unopened pantyhose in my closet. Heels practically filled in the rest of the space.

I guess its just the act of browsing and purchasing women’s clothes that I love so much and, admittedly, it does turn me on a bit. It feels good to basically tell the lady helping you that you are a crossdresser without actually telling her. Yet, today I’m going to my favorite lingerie shop where I am known as a crossdresser.

I had stopped in there for the first time a couple years ago looking for items “for my girlfriend.” I don’t know how but the lady there, Tammy, spotted me as a crossdresser instantly. I could tell by her not-so-obvious sarcasm at my choices for purchase and, although she didn’t call me out on it, she was very polite and treated me very well as one of her customers.

Since then, I occasionally stopped in to pick out an item or two and, eventually one of those times, I had admitted they were for me. Tammy never took it as a surprise and was actually more helpful to me in picking out a cute little skirt or a lacy camisole that would go well on me. She was always supportive of me and we have even had open conversations about my fetishes which I found rather therapeutic.

So today I walk in for another round of shopping, never en femme since I’m still in the closet about it, and greet Tammy once again. We begin with our usual chit chat as I start to browse around looking at the new club shorts that are on display. Interestingly though, our conversation takes a different turn.

The topic began with the economy on how sales were slowing down for Tammy and how she was beginning other business endeavors that were beginning to bear fruit for her. Curious by now, I ask her, “And what would that be?”

I grow even more curious. “What kind?” I ask.

“At the moment bondage, foot fetish, smoking, pantyhose and crossdressing,” she replies but with a look of interest in my reaction.

“I’d like to check them out sometime,” I add giving here a wink. Tammy then hands me a business card with the web address.

Yet she doesn’t stop there mentioning, with my tastes, how I would likely enjoy them (I quite agree). Then, oddly, she starts commenting on my lovely slim figure and long legs which happened to be shaved. This flatters me quite a lot and Tammy could see that I played right into her hand.

She then drops the bomb, “I hope you don’t get offended but we are looking for someone as attractive as you are to star in our films.”

So I ask with a huge smile, “What did you have in mind?”

“With your body and gorgeous legs we would love to start you out with our pantyhose fetish sex series and take it from there.”

This tempts me even further. Tammy knows quite well about my pantyhose fetish, even on occasion making special orders for me for my favorite exotic brands like Wolford or pantyhose from Italy. I’m so flattered that she thinks my legs are sexy enough in pantyhose that I’ll pretty much say yes to anything she asks for at this point.

“Why I’m so flattered…” I say just before Tammy begins to interrupt me.

“You mean I would be having sex with other men?” I ask.

Tammy clarifies, “Well we have another crossdresser we work with too. He is very beautiful when we dress him up though. You’ll see.”

I ponder this for a second. The thought of me having sex with a man, then filming it, turns me off completely. Yet, if she is telling the truth and he does appear to be a beautiful and hopefully incredibly convincing female, well, maybe I could give it a try. Really, just the excitement of being in an adult movie excites me enough to almost try anything. I make my reply.

“Can you come to our studio later today, say around 6:00 PM?” she asks pointing to the card she handed me earlier with the address on it. “We’ll go through some trials to basically get you use to the camera and shake you free of your nervousness.”

Tammy then adds, “We’ll also have you try out some lovely pantyhose which I know you love: Wolford, Cecilia de Rafael, Silvia Grandi. Basically what our viewers crave in good fetish videos. Not to mention sexy lingerie to go with them. Oh, and the toys too. You’ll love them!” she says while giving me a wink.

She later adds a disclaimer, “If it turns out this is not for you, we’ll let you keep the pantyhose, lingerie and toys as a thank you for trying. If you do want to keep with the filming, however, we would give you a cut of the profits.”

“Our other crossdresser, Janine, is actually earning quite well I might add.” Tammy adds, perhaps nailing me with her selling point.

Next > Part 2: A Date With Cherry Knot