Home › Commentary › I Seem to Only Like Cosplay For The Tights

I Seem to Only Like Cosplay For The Tights 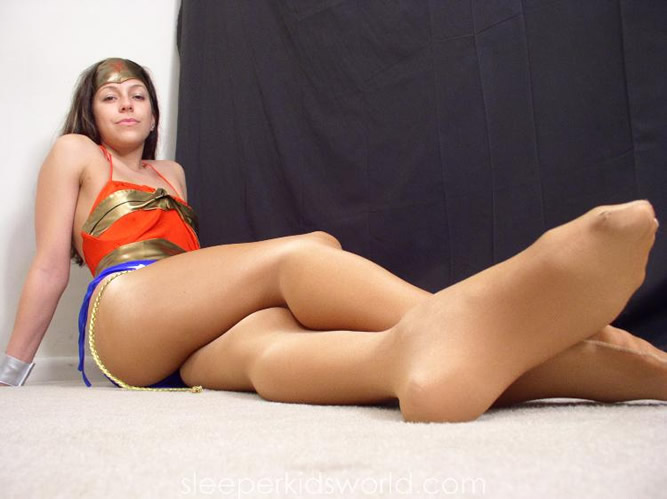 I have no idea why, but I somehow never got into cosplay. You know, dressing up to the tee as your favorite superhero (but really superheroine) then meeting up with other nutjobs who do the same thing. THEN you act out role-play fights and the other shit they do in the cartoons and comics. There’s even a “crossplay” for those crossdressing as superheroes. Either way, it actually sounds good for shits and giggles.

I’ll even go as far as to blame those cartoons for me tinkering around with a pantyhose fetish by first stealing my sister’s ballet dance tights, throwing some red knee-high socks (also hers) over them pretending they were boots and finally “cosplaying” like I was Wonder Woman. Of course, I’d also pretend that I was being kidnapped by tying up my legs with shoelaces, an ode to a later bondage fetish.

So today, I happen to stumble upon a few random images of a cute Wonder Woman clad in the red, blue and gold bustier-leotard thingy and shiny tights. It’s something about the combination of those thick Danskin tights, with a brilliant streak of light gleaming off of them, along with something tight and costumy/leotardy that spells instant hard-on thinking about those memories of my sister’s tights. Minus the sister of course.

Like a snotty wine drinker who just wants a beer at the moment, I spent the better half of this morning getting my regular pantyhose/tights fetish fix browsing through some these cosplay sites. I find them quite strange assuming that they are targeted to those with a superhero-in-tights fetish, but enough so to make you the aforementioned cosplay nutjob. Instead of showing outright sexuality in the cosplay, they rather focus more on cosplay roleplaying shit.

I’m also surprised to find some of the leading ladies of the pantyhose fetish arena have made the leap over into the world of cosplay. If you’re familiar with Randy Moore (AKA Maria Valentine), Cali Logan or Akira Lane, then you guessed it, you’ll find them donning sexy costumes, slipping on the tights and prancing around doing high kicks and “beating up” other sexy villains. Unfortunately, they fall victim to the bad acting side of their cosplay figures rather than those real sexy poses they are known for.

It’s probably the fact that I just don’t understand this whole cosplay thing. Looking at pictures of bad fake punches and grimaces for sexy models dressed as their cartoon prototype doesn’t turn me on. Maybe if their legs are bound, ok maybe a little, sure. If they are bound to a table as a captive, with their leotard ripped open, not to mention the tights too, then I may stick around a while longer. I’m a different kind of nutjob.

By the way, here are a couple sites that may rock your cosplay jollies, which sort of did for myself. They have some nice free samples too!