Home › Commentary › Keep “Pantyhose For Men” Out of the Fetish

Keep “Pantyhose For Men” Out of the Fetish 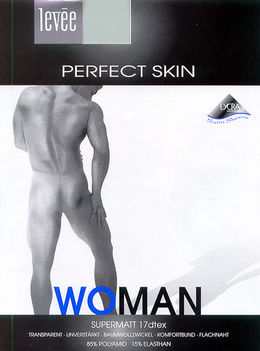 It seemed inevitable, but as pantyhose manufacturers realize that a good majority of sales are from men (a good majority of those from yours truly), then somewhere the light bulb flicked on and thought, hey, we might as well cater to them too.

In fact, from The Columbus Dispatch:

At Luxelegwear.com, a Web site based in Atlanta that offers European brands to buyers in America and worldwide, about 80 percent of sales are now to men.

And we now have an influx of the so-called “mantyhose,” everything a man could want in the woman´s version but tailored specifically to him. How nice of those manufacturers to do for us.

Well, I’ve gone as far as to even try a pair, actually the exact brand in the image above. They certainly weren’t cheap and shoddy and actually fit quite comfortably on my legs and ass. Yet, unfortunately, a major mark against them is that they fail to satisfy the most important task of all:

So here are my particular beefs with pantyhose for men.

I understand that pantyhose serves a non-erotic purpose for men. Primarily, they help with circulation in the legs and warmth in the colder months. Sure, they could cover all those nasty warts and bullet scars too.

A result is that they have to be constructed to suit the male anatomy so they don’t run all over the place after a first wear. Some even have extra room in the crotch and built-in fly too. What a concept!

So going back to that 80 percent of pantyhose sales by men, what percent of those men would you guess think that these are fantastic features and become buyers? Ok, there’s no survey conducted that would prove this but a good measure is would you find yourself buying a pair just because it is tailored to you as a man?

Ok, I did, but just to satisfy the curiosity. If you think of trying them out, I’s like to see the bullet scars on you.

Function gets lost in translation

I won’t knock on the features of pantyhose for men but, personally (as well as many of you out there, I like the feminine feel, shine and appearance of the woman´s version. In other words, I erotically transform myself into a woman and satisfy my pantyhose fetish.

Pantyhose “made” for a man, however, loses that feminine appeal and, sigh, becomes just a weird undergarment much like a jock strap. Yuck.

The truth is that women’s pantyhose will actually serve the intended functions of mantyhose (save the built-in fly) by buying high-quality pantyhose. There are many varieties of thickness (denier) to suit warmth or compression needs and buying an appropriate larger size to your anatomy will keep you comfortable and without runs to deal with.

An added bonus is that you can keep your femininity in the process.

My major issue with pantyhose for men is that it attempts to mainstream the use of pantyhose by males. In fact, I’m sure you’ve seen certain brands or heard the term “mantyhose” prior to reading this. It goes without saying that they are pretty well marketed.

I’ll concede that maybe it gives men an excusable reason to venture out into the public with hosed legs. I can just see the conversation:

Stranger: Why are you wearing pantyhose? Are you gay?

Man: You never heard of mantyhose? Hello, get with the 21st century my friend.

Stranger: Do they cover up bullet scars well?

Even hosed in private, it’s the taboo that gives pleasure in a pantyhose fetish.

Ok, maybe I’m a little hard on the concept of pantyhose marketed for men. Personally, I think it is a trend that will wind down just like the white-washed jeans of long ago. I don’t actually mind the mantyhose concept, yet I would much rather see men express their true love of pantyhose using their feminine side and wearing women’s pantyhose.

The pantyhose fetish needs to be kept alive.

I mean what’s next? Bras for men? Oh yeah, right.

3 comments on “Keep “Pantyhose For Men” Out of the Fetish”