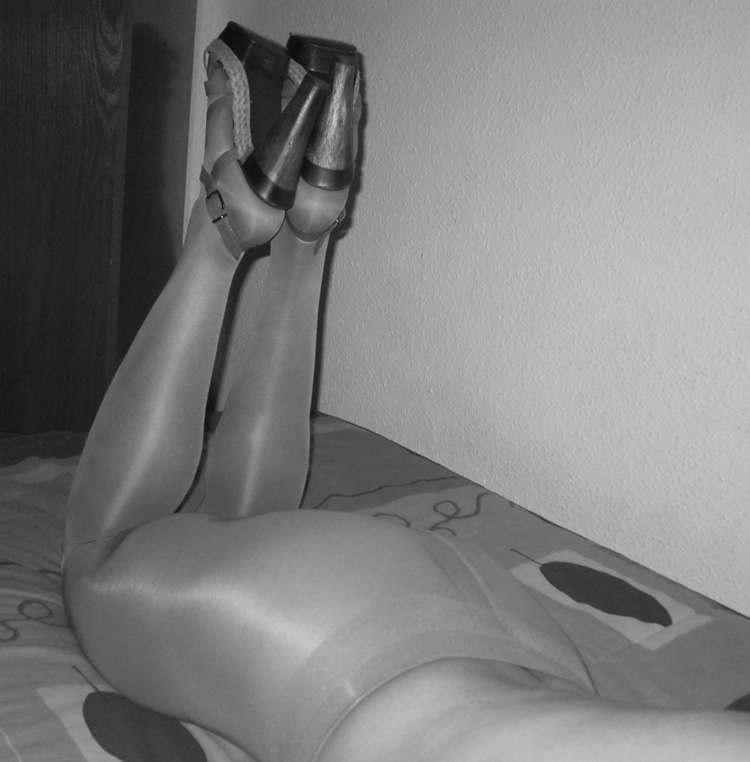 Jim and Dave were each admiring to themselves the beauty that was before them. Yet they had no idea that underneath that well dolled-up woman named Carla, standing in front of them, was a crossdresser forced by his own wife to act out his fetish in pantyhose, lingerie and a sexy dress and heels. And now in front of other people or, better yet, men who Carla could tell were ogling her with their eyes.

Yet, despite the terrorizing fear she had of being outed, not only by Amy, she was almost equally excited bathed in the silky tightness of her lingerie, hearing her pantyhose rustle and knowing full well that she achieved the status of a passable woman.

After handing Carla, Jim and Dave their screwdrivers, Amy returned to the kitchen and prepared the dinner. Meanwhile, the other three began sipping their screwdrivers and their chit-chat. Carla continued in her feminine voice as before since it had done her well up to this point.

“I’m a stylist,” she replied, obviously a lie.

The conversation continued with the usual boring get-to-know dribble when Amy came out from the kitchen and pulled Carla back into it, tugging on her dress.

“You’re going to do exactly as I tell you from now on,” Amy whispered angrily to Carla. “If not, I tell everyone at your job, your family, EVERYONE about your little girly crossdressing side,” she continued, pushing Carla back toward the dining area.

“Ok,” was all that Carla could mutter.

“Oh, and I won’t skip the the part about those tranny sluts Chelsea and Jenna,” Amy added as Carla was leaving the kitchen.

Carla was stunned, enough so that her voice naturally became higher and more lady-like without even trying. Yet she resumed her conversation with Jim and Dave while practically gulping down her screwdriver. Amy knew everything and she was now at her mercy.

Minutes later, Amy layed out the meal of tuna casserole, pork chops and salad on the dining table then raced back to the kitchen to prepare three more screwdrivers. After she returned, all four sat down, filled their plates and began their meal with a bit of chit-chat in between. Amy had done well to loosen the conversation with the stiff screwdrivers she made for the other three.

“So, how about you give me a good, no, GREAT deal on that kitchen remodeling job we talked about?” asked Amy to Jim and Dave rather bluntly.

“And why should we do that?” Jim replied jokingly.

“Because I’ll throw in Carla,” Amy said smiling while looking at Carla. “She’ll do whatever you want.”

“What exactly is ‘whatever?'” Jim asked clarifying if it was what he “thought” it was.

“You can both have her… one in front, one in back.” Amy clarified and, again, smiling at Carla. “She really loves it in the ass, don’t you Carla?”

Jim and Dave were both shocked at the offer, not to mention, the fact that Amy was pimping her “friend” to them. As they both looked at each other, they mutually agreed, without having said a word, that a fine piece of ass could not be passed up. They’ll worry about the price some other time.

“Come this way gentlemen and you too Carla,” Amy said, directing the three the recliner chair in the living room. “Carla, you be a good girl and do what they want, ok?”

Carla was completely stunned by the proposition but, realizing she had no choice, got up from the table and walked over to the living room. She then followed Amy’s motioning to get on her knees in front of the recliner.

“Who would like to get sucked? Jim?” asked Amy.

Jim didn’t hesitate to sit himself down in the recliner, unzip his pants and pull them down. Meanwhile, Carla reluctantly grabbed Jim’s now-hard cock and started sucking, leaving rings of lipstick behind. As memories of her cock-sucking abilities with Chelsea and Jenna started to come back to her, she soon became more comfortable sucking and slurping with the same intense passion as then.

“Dave, looks like you get her cherry ass. It’s all yours!” Amy said to Dave, who positioned himself behind Carla and dropped his pants to reveal a throbbing member of his own. “You’ll need this,”Amy continued, handing him a small bottle of lube.

Dave quickly squirted a bit of lube on his cock and rubbed it down. Then, with Carla’s pantyhose covered ass in front of him, he made a hole in the back of the pantyhose just big enough to enter. He then slowly penetrated Carla’s love canal.

Carla paused and let out a low moan, after feeling her ass being violated, then continued on blowing Jim, who was moaning wildly in pleasure himself. On the other end, Dave began thrusting slowly at first, then picked up the pace pounding on Carla’s ass like a jackhammer and leaving a very loud clap after each ramming. Finally, he began to wildly moan, along with Jim.

Carla loved being fucked in the ass hard and showed it by worshipping Jim’s cock, licking and sucking like an industrial strength vacuum. In fact, she practically forgot her predicament with Amy being way too involved in her three-way.

Then the moment came where first Jim let out an “Ahhh,” blowing his hot wad in Carla’s mouth, while she quickly tasted, then swallowed not wanting to stain the carpet below. Dave soon followed, releasing his love juice inside Carla’s ass which she happily felt. Jim and Dave then pulled out, zipped up their pants and sat on the sofa nearby.

Carla, meanwhile, got up and pulled her dress down, covering the hole in her pantyhose, and went into the bathroom to straighten up.

Amy, not hearing any more ass-ramming or moans returned to where Jim and Dave were.

“Now about that remodeling price. I’d say 50% off would be a good start?” Amy asked to the both with a smile and a wink.

“Not a problem,” said Jim. Dave nodded in agreement.

Jim and Dave, still glowing in their trist with Carla, got up and made their way to the door to leave. Carla, just returning from the bathroom, said goodbye to the two with a kiss on the lips to each. They weren’t quite the gorgeous crossdressers, Chelsea and Jenna, yet she still had her fun being their crossdressed prostitute.

As Jim and Dave left, Amy looked over to Carla and said, “Perfect, now I need a new car too.”