The Summer of Crossdressing 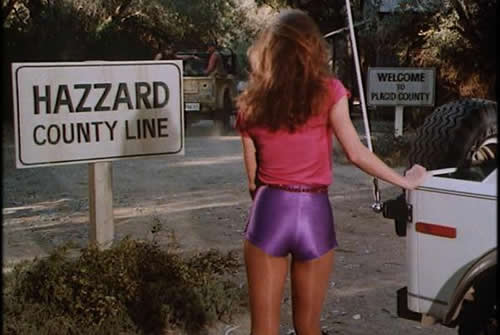 Ah, it’s that time of year again. The weather heats up and we all come crawling out of our solitary caves, out for whatever piece of life that exists beyond our abodes. For us closeted crossdressers, that means skipping all those layers over your pantyhose and bra and getting out there to flash some femininity in public.

One image I can’t get stuck out of my head this time of year is Catherine Bach (you know, Daisy Duke) in her tight little shorts and pantyhose covering her so very long legs. In fact, it even inspired me this time around to try out my own leg show just the other day.

OK, I was suppose to go fully dressed en femme by now but I chickened out. It seemed a little too much for me for now. I know, I know, I’m such a sissy so quit your pointing and laughing. It’s not like I didn’t want to venture out in the public showing off my fetish, just take it down a notch.

So I decided to try out wearing pantyhose on my routine jog. Along with a t-shirt, jogging shorts that go midway up my thighs, ankle socks to absorb the sweaty nylon and my usual running shoes, I did a four-mile run through a major avenue, up a beach in Barcelona and back home.

I guess I have to give a disclosure too. It was at night. Again, no laughing.

There were actually people out and about that evening and there was proper lighting all along the route, eliminating my protection from the cover of darkness. This had to have a public aspect to it after all, but only kept to a minimum to ease my anxiety. I also chose my Oroblu Magie 40 pantyhose in a suntan shade, maximizing the shine on my legs. Though scared, I wanted to be somewhat noticed.

And shiny my legs were. So much that I believe the nighttime lighting along the roads and paths actually enhanced the pantyhose shine to the point were you could spot it from a distance away. So without giving a second thought to backing out, I went off to run.

I have to say it was the most exhilarating experience I’ve had crossdressing, even it was just my pantyhose on display. I was careful in looking at the people that I passed by to gauge their reactions. For the most part, people were minding their own business. Yet there were a few that I caught looking at my legs as they glided on past.

What was really interesting was that a few people even looked at my legs, then up at my face with a yes-that-is-a-man-in-pantyhose reaction. I even noticed, from my peripheral vision, that one woman stopped and looked back as I passed her. As fearful as I was that I would be “discovered”, it actually really turned me on forcing an occasional hard-on and massive urge to relieve it.

So was my public “outing” worth it? Absolutely. I still have, however, a paralyzing fear that one of my friends catches me in the act. So Act II might be donning more feminine wear but when travelling up north to France where I have far fewer friends.

Oh, and I don’t recommend running in pantyhose. Wringing out all that sweat out isn’t that much of a turn on.

Tagged with: coming out, crossdressing, pantyhose
Posted in CD Diary

2 comments on “The Summer of Crossdressing”